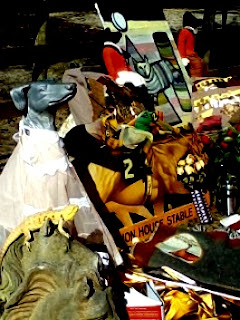 So.....I decided to do this elaborate set design outside on a glorious china-blue skied day with cream puff clouds sailing along like Samson with no place in particular to be or go and find Delilah. Zippy would be the star riding astride a hand chiseled, salmon colored stone horse head  I have at the head of my cemetery for all of my beloved animals who have lived out their wonderful lives here in South Carolina, where I somehow managed to land like Dorothy in the Wizard of Oz who tapped her ruby red slippers wishing to be anywhere but Flanders Road where Tommy had died, and I knew not who I was nor where I was supposed to go and be me with all my horses and cats and guinea hens, and chickens without him.

I know I said that Zippy is the star of this story......but as always, in my long complicated life.....things always get to be more complicated and contangled confangled and combustible and disputable, distorted, clandestine or dined may be more appropriate since that's where a lot of the filial familial family explosions erupted., suffocating, conflagated a 1957 White and red Chevrolet convertible we grew up in as the all American Pie Family cruising along in a dream life of success and Glory. Who could ask for more??? Much Much more and far less than ever was or needed to be or should have been or could have been if God Bless America things worked out like OUR BESTEST OF DREAMS.  Better than they ever are ?  Better than we really are ? or were or could have been or just don't bother to be bothered about it all at all. Now that would be sanity....but be careful....you just might get what you want ! No Surprise.....I'm my Father's and Mother's third child. God Bless my older sister, brother, and younger sister. Actually, we all were extremely blessed and privileged, and talented. It's just that sometimes things can all just go askew so badly that no sense can be made of it all forever after.

O.K. just had to let that all out. Now.....how exactly did I land in a psychiatric rehabilitation facility for fourteen days? It most certainly isn't like Eagle Hill in Sandy Hook Newtown, CT  (where all the young grade school children were killed), Carrier Clinic in Belle Meade, NJ, Guenster House in Bpt.,CT, Silver Hill in New Canaan,CT (3 times) and all the A.A. meetings and institutions for one thing or another and the ones I forget and can't in script if I don't remember what I DIDN'T FORGET AND THE JAIL PLACE ALL WOMEN SLEEPING ON THE FLOOR AT NIGHT BECAUSE OF THE OVERFLOW OF WOMEN WHILE NEW BUILDINGS WERE BUSY BEING BUILT BUT SO MANY WOMEN WERE COMMITTING MORE AND MORE CRIMES SO QUICKLY AND BRAVELY AND DANGEROUSLY THAN MEN TYPICALLY DID THAT RING AROUND THE ROSY AND ALL THE STUFF DONE IN THE PLAY GROUND WHEN WE ALL WERE KIDS AND JUST KIND OF TRYING TO HAVE A GOOD DAY. WHERE DO ALL THE PEOPLE GO? the STEEPLE IS STEEP, AND SO IS THE HILL, AND THE CAT IN THE HAT IS NICE TO BEHOLD. TICKTOCK TICKTOCK.

Oh....by now I bet you think (misthink) that I Fell Off the Wagon. Nope. I lost my beloved Zippy and Came unglued. My neighbors (adoptive Family) found me on the ground in a fetal position, and the cops and ambulance whizzed me off to the Emergency Room in the hospital. It all began when I set up the scene outside for pix of Zippy. When complete, and I did get a bit carried away, I put Zippy on the top of a horse head stone statue I have and started snapping photos with my cell phone. The sun was bright and it's really hard to see what I'm seeing because of the glare of the sun which I was trying to keep behind me. I just kept clicking, figuring I'd come up with some cool stuff to work with. Then this vase of roses blew over breaking this antique vase of mine and I rushed to pick up the pieces and bring it all inside, seeing as I had bare feet and didn't want Zippy to hop down on it. As I got to the top of the steps, I threw the glass shards and vase on the floor and rushed back for Zippy who was GONE !!!! I ran around like the Mad Hatter, but no luck finding Zippy. I became a whirling Dervish, got frantic, got delusional, got hysterical, didn't answer anyone's phone calls at all cuz I didn't want to be an alarmist or drama Queen, or me, or anything on the X-Files.

Ultimately.....Mom called 911, thus my fortnight at in the Acute Care Unit at the local hospital. It was just fine and helped me sort stuff out. I was very weary, however. My new friend Jim picked me up. We got Tuxedo, my black and white dog, up from my vet's, and home we cruised. It was later that evening when the door was a knocking. My neighbor Sarah was there asking me if I loved her."Of course I love you Sarah. You know that!" "Do you really really love me Sasha? Well let me give you a hug and a kiss and prove it to you; then I'll give you this." She hands me a little blue cat carrier and inside I was afraid was a new baby cat and I swore I wouldn't replace any of my cats YET in my life. Although...without Zippy a kitten wouldn't be such a bad idea. Except pets tie one down, and without much money to pay for their care when one travels......things can become awfully expensive. Why do you think I haven't seen my mom in 9 years ? Anyhow......it wasn't a kitten........................It was ZIPPY !! ZIPPY CAME HOME TO ME!! WHAT A HOME COMING GIFT FOR HIM AND MYSELF !! I THOUGHT I WAS DREAMING !!!!

Story and illustration by Sasha Thurmond who is an artist and writer living on a farm in South Carolina with her horse and other animals who also finds time to write, paint, and take photographs. She is a graduate of the Master of Fine Arts program at Cornell University, where she studied with Steve Poleskie.

Great fascinating and articulate story by Sasha. She really knows how to express her experiences.