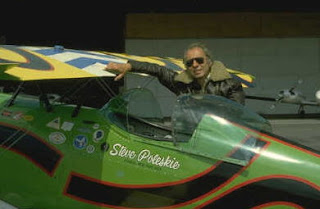 
DURING THE 1970s AND 80s ARTIST STEPHEN (STEVE) POLESKIE, created numerous temporary artworks in the sky by flying an aerobatic biplane trailing smoke through a series of intricate maneuvers. He called these ephemeral events, which were sometimes accompanied by musicians and dancers on the ground, and parachutists in the air, Aerial Theater. Over the years he did performances above many cities in the USA including: New York, Boston, San Francisco, Washington DC, Richmond, and Toledo. In 1978 Poleskie disassembled his Pitts Special biplane, which he had rebuilt and specially painted and reassembled it in an art gallery in New York City to accompany a show of his drawings. You can see this on his web site link below. Poleskie's Aerial Theater was very popular in Europe, especially Italy, were his events in the sky were considered as the logical extension of the work of the Futurist artist Fedele Azari. Poleskie also was able to do performances in Germany, Switzerland, and the UK using borrowed or rented airplanes.

We have recently uncovered a 1984 film of Poleskie explaining what his Aerial Theater is about and showing some drawings of projects that he is working on before taking up his biplane and and flying through a piece. You can view this ten minute film by clicking on the "Art Flyer" link below. Poleskie also talks about his art, and flies a performance, with views from the cockpit, on the Channel 9 interview, which is the  third link below.