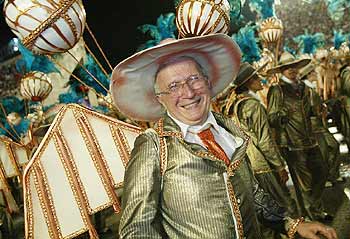 Roald Hoffmann at the Carnival in Rio de Janeiro, 2004

HERE IS A PHOTOGRAPH of our friend Roald Hoffmann, poet, and Nobel Prize chemist dressed as Santos-Dumont for the 2004 carnival in Rio. You might ask: Who was Santos-Dumont? Here in the U. S. A. the Wright Brothers are considered to be the first persons to have successfully flown a heavier than air flying machine. However, in many other parts of the world this honor is attributed to the Brazilian Alberto Santos-Dumont. This is a controversial subject about which we have included some information below. Santos-Dumont's success with dirigbles may have inspired the American balloonist T. S. C. Lowe to return to what would become his final project, his "planet airship," a design for an ocean crossing balloon. He had been working on this idea when the Civil War interrupted his plans, causing him, at the request of President Lincoln, to devote his time to organizing a balloon corps for the Union Army. You can find out more about T. S. C. Lowe from some of the other entries to this blog, including excerpts from the biographical novel Steve Poleskie has written on the balloonist, and a review of the book The Balloonist in the blog entry below this one.

Alberto Santos-Dumont (July 20, 1873 - July 23, 1932) was an important early pioneer of aviation. Although he was born, grew up, and died in Brazil, his contributions to aviation were made while he was living in France.

Santos-Dumont described himself as the first "sportsman of the air." He designed, built, and flew a variety of balloons before developing the first practical dirigible balloons (i.e. airships.). In addition, he made the first fully public flight of an airplane, in Paris in October of 1906. That aircraft, designated 14 Bis or Oiseau de proie (French for "bird of prey"), is considered by many to be the first to take off, fly, and land without the use of catapults, high winds, or other external assistance. In comparison, Wright brothers did not make any public flights until 1908 with an improved Flyer presenting a considerably higher power-to-weight ratio. Thus, most Brazilians, as well as many others around the world, consider him to be the "Father of Aviation" as well as the inventor of the airplane.

Santos-Dumont Number 14 Later the balloon envelope was removed and the aircraft renamed the 14bis meaning "14 again".

The above material on Santos-Dumont came from the Wikipedia Free Encyclopedia, a very useful site that can be accessed at www.wikipedia.org.

And what does Roald Hoffmann do when he's not dressing up as Santos-Dumont for a carnival parade in Brazil? Not only a recognized poet, Hoffmann is also the John A. Newman Professor of Physical Science at Cornell University. In addition to sharing the 1981 Nobel Prize in Chemistry with Kenichi Fukui, he has been honored by the American Chemical Society with the Priestly Medal, the Arthur C. Cope Award in Organic Chemistry, and the ACS Award in Inorganic Chemistry. Professor Hoffmann has also hosted a twenty-six-segment television documentary on the Public Broadcasting Service entitled The World of Chemistry. Additional information on Roald Hoffmann, and some of his poetry, can be found on his web site, www.roaldhoffmann.com.

Thank you for logging on. Please check back again. If you have a short piece you would like to submit for publication you can send it in the body of an e-mail, or as a Word attachment to OnagerEditions@aol.com.

A Book Review - THE BALLOONIST

Here is a review of THE BALLOONIST as it appeared in the December 15, 2006 issue of BOOKLIST, the magazine published by the American Library Association.

Poleskie, Stephen. The Balloonist: The Story of T. S. C. Lowe – Inventor, Scientist, Magician, and Father of the U. S. Air Force.

This first full-scale biography of Thaddeus Lowe (1832-1913) makes fascinating reading for aviation buffs and students of nineteenth-century eccentricity. Lowe is best known for organizing the Civil War Army of the Potomac’s Balloon Corps, though it was disbanded because of losing high-ranking support, bureaucratic infighting, and, to some extent, the technological immaturity of balloons. Lowe was a stage magician before the war and after it worked seriously in such fields as mountain railroading and the extraction of hydrogen from water. His career suggests a failed Thomas Edison. Endlessly fertile in his invention, he lacked an organization to support the development of his ideas and winnow the viable ones from the rest. He never abandoned balloons, however, and left a definite legacy to fixed-wing aviation in the person of his granddaughter, aviatrix Pancho Barnes (1901-75, subject of Lauren Kessler’s biography The Happy Bottom Riding Club. 2000). Aviation and history collections may acquire this seemingly tangential book with clear consciences.  – Roland Green

Copyright 2006, the American Library Association. This document may be reprinted and distributed for non-commercial and educational purposes only, and not for resale.

Thank you for logging on. Please check back again. And ask for THE BALLOONIST at your favorite bookstore or online. You can read an excerpt from this novel in the entry below. The review of Paul West's recently published poetry book has just been moved to the archieves, look for it there.

Tags: Stephen Poleskie, T. S. C. Lowe, Pancho Barnes, The Balloonist, The U. S. Civil War, The Army of the Potomac, book reviews,
Posted by Sid at 5:26 PM No comments: