BORN IN AN ENGLISH VILLAGE, in the shadow of Sherwood Forest and the Sitwells, Paul West has lived in Ithaca for over thirty years.
“I am a country boy, born and bred,” he says. “I like trees and lawns, animals and huge silence.”
He seems to have spent most of his time here writing in the lamp-lit hours of deep night, while the rest of us mortals slept, because he somehow managed to write nearly 50 books, most of them novels that are wantonly stylish, wickedly imaginative, and often tackle how Good tilts with Evil in the world, while also being irreverently funny.
When not writing, he would bask in every drop of sunshine, listening to classical music, or swimming—sometimes simultaneously—until he turned the color of teak. Although he’d painted and done collage when he was a student at Oxford, afterwards he poured his creativity into writing, and he really hadn’t touched a brush in 50 years.
Then one night out of the polychrome blue, at the age of 82, after two strokes had confined him to a wheelchair, he woke at 1:00AM, climbed out of bed, found a set of old watercolors, and painted all night long. The same thing happened the following night, and every night since. By now he’s amassed hundreds of artworks—watercolor and mixed media—all created with his left hand and abundant joy, in night owl flights of imagination. His work is tender, provocative, and funny.
West’s most recent novel, The Invisible Riviera, is published by  Onager Editions. The book's cover features one of Paul's water colors. A chapter excerpt from this book can be found in the February 2013 postings of this blog. See the sidebar to your right. 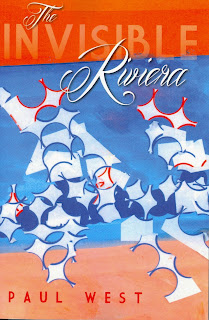 West has been the recipient of numerous prizes and awards, including the Aga Khan Prize, two National Endowment for the Arts Fellowships, the Hazlett Award for Excellence in the Arts, the Literature Award from the Academy and Institute of Arts and Letters, a Lannan Prize for Fiction, the Grand-Prix Halperine Kaminsky Award. He has been named a Literary Lion by the New York Public Library, and a Chevalier of the Order of Arts and Letters by the French Government, and he was nominated for the Nobel Prize in Literature.

STEVE POLESKIE AT CHIRON PRESS IN THE 1960s

A look back at the highly influential Pop Art screen printing atelier, Chiron Press, and its founder Stephen Poleskie.

Chiron Press  (named after the mythical centaur) was the brainchild of Stephen (Steve) Poleskie (b. 1938), an artist who had worked for 3 months as a printer in Miami doing commercial  screen printing jobs, a skill he picked up after reading a free booklet from the  Sherwin-Williams Paint Company.  In 1961 Poleskie moved to New York City and rented a studio on East 10th Street near Tompkins Square Park, with the intention of furthering his art career. Since the 1950s, East 10th Street had been a hotbed of the downtown New York art scene.  Abstract Expressionist painters such as Willem De Kooning (1904 – 1997), Franz Kline (1910 – 1962) and Milton Resnick (1917 – 2004) maintained studios nearby.  The Tenth Street Galleries – a series of artist-owned co-operative galleries often run with no staff and very little money – formed a nucleus of alternative and avant-garde art spaces. The Judson Memorial Church, located on Washington Square South near East 8th Street, operated a gallery that debuted works by Tom Wesselmann (1931 – 2004), Jim Dine (b. 1935) and Claes Oldenburg in 1959.

Living on East 10th Street, Poleskie got to know with many of the scene-makers of the day. He befriended Raphael Soyer while taking his art class at the New School.  He met Elaine and Willem deKooning, Frank O’Hara (1926 – 1966), Louise Nevelson (1899 – 1988) and Rivers. He was introduced to Leo Castelli and the Pop artists that were just starting to show at the Castelli Gallery.

After fielding numerous questions from other artists about how to make screen prints, Poleskie recognized that there was a need, and in 1963 he opened a shop (initially called Aardvark Press) at 614 East 11th Street and became the master printer. Within a short period of time he was swamped with jobs.  It seemed he was the only person around who not only knew how to make screen prints but, more importantly, could communicate with artists to translate their vision into a print. Since screen printing was, at that time, only used for commercial ventures such as billboard printing, Poleskie’s artistic background and connections made him a perfect conduit. Poleskie's studio assistant was a young Yale MFA graduate, Brice Marden (b. 1938).

The very first prints made at Chiron Press  was a suite of four by Alfred Jensen (1903-1981), an abstract artist who painted in grids of brightly colored triangles or squares, often incorporating numerical systems.  Poleskie recalls that Jensen lived next door on the third floor and he could often hear the artist begging his dealer Martha Jackson to send him money. In the end, Jensen paid for the prints himself – the bill for the whole job was $400.

With a long waiting list of galleries wanting their artists to do silkscreen prints, Poleskie was able to move the operation to 76 Jefferson Street and took a partner, Neville Powers. Because of its low rent and good light, 76 Jefferson Street became a magnet for artists. Later, recognizing the large number of artists who lived and worked in the building, such as Marden, Neil Jenney (b. 1945), Janet Fish (b. 1938), Valerie Jaudon (b. 1945), Richard Kalina (b. 1946), Poleskie, and Chiron Press, MOMA mounted an exhibit in 1975 called “76 Jefferson Street.”

In the early stages, Chiron Press had no fancy equipment. Poleskie used a handmade wooden table to make the prints. He didn’t have any drying racks so he used clotheslines. His only ventilation was an open window. He didn’t have a phone – it was located in the bar downstairs where the bartender would take messages. Although later screen printers had artists paint on clear acetate and then transferred the images photographically, Poleskie preferred to use real silk to support the stencils to receive the images, and to squeegee the prints by hand.  He also hand-cut all of his stencils from lacquer film  It was a time consuming process, but the results were brilliant, saturated colors so emblematic of the early ‘60s that are the hallmark of Chiron Press prints.

Chiron Press printed Lichtenstein’s very first screen print “Brushstroke,” in 1965. The artist was working on a series of Brushstrokes paintings for Castelli Gallery that were a satirical response to the emotionally laden gestural painting of Abstract Expressionism. But Lichtenstein was also interested in drawing a picture of a brush stroke as if rendered by a commercial artist. Since screen printing was also a commercial process never intended for fine art, “Brushstroke” was a perfect graphic expression for Lichtenstein.

Warhol worked with Chiron on two occasions to make sculptural prints which bear an affinity with Oldenburg’s large soft sculptures of the period. The first, “Paris Review” 1967, was an enormous liquor bill, measuring 37 x 27 inches, with die cut holes to resemble punched receipt holes. The other, “Lincoln Center Ticket” 1967, was an enormous ticket stub measuring 45 x 24 inches printed on opaque acrylic, published by Leo Castelli Gallery to commemorate the Fifth New York Film Festival at Lincoln Center. It is interesting to note that the artist himself was a prodigious filmmaker who produced 12 films in 1967 alone.
Chiron Press was one of the first to work with women artists. Marisol (b. 1930), Nevelson, Elaine DeKooning (1919 – 1989) and Helen Frankenthaler (1928 – 2011) all made prints there.

Pop Art was not the only focus of Chiron – in fact the prints created there track the divergent artistic movements of the time. Another forerunner of Pop Art was Nicholas Krushenick (1929-1999), who made hard-edged abstract paintings with a Pop sensibility. His brilliantly colored silkscreen “James Bond Meets Pussy Galore” made at Chiron in 1965 demonstrates a highly original vision.

Poleskie’s own prints created at Chiron during 1967 were abstract and geometric meditations on landscapes. He has said that living in a crowded city such as Manhattan, he could only imagine the landscape, “I lived in the city and thus could not see the land, but it was there – in the advertisements, behind the cars, the soda pop, [and] the cigarettes.”

In 1968 Poleskie sold Chiron Press so that he could devote more time to his own artwork without the distractions of the city. He moved to Ithaca and accepted a teaching position in the Art Department at Cornell. He is now a professor emeritus.

Despite its brief 6 year duration, Chiron Press was responsible for a major shift in how artists used printmaking in their creative process. From strictly industrial uses, screen printing has risen to a fine art form. The sheer volume of influential artists who made prints at the Chiron Press atelier reads like a who's-who of the art world of the 1960s and many would achieve art superstar status later.