A Poem to Marina Abramovic by Mike Foldes

I do not want
to see anyone
cut themselves.
I do not want
to see anyone
hanged.
I do not want
to carry a body
to the grave,
or to an ambulance
because they have ingested
too many colored pills,
put a needle
between their toes,
into lifeless arms
or under eyelids.
Who done up
these sorrows,
anyway?
Assessing, subtly
casting stones
in some direction
directionless living
observer, observed
subject and subjected,
jackal and slave.
How unclever to discover
in the deeply enriched
entrenched echoing ego
asshole observers
sitting up straight
straight up your ass, man,
straight up your ass,
veil of veils…
vile pleasure in pain
mixed autonomy
mild anxiety
that can, too,
be mined
if one has a mind
to
bringing out the best
where the worst
is the best it gets.
Imagine that
Cling to your carpet
One with carpet
One with wall
A squall gathers
At the door,
A squall gathers
In your belly,
A squall gathers
In the room
Where everything
Moves magisterially
Passing priests pissing
Blood on the path
To purgatory,
Barking dogs,
Hissing cats,
In holiday season
Anthropomorphic
Medial lobotomy
Claustrophia
Hydrophobia
Santa Claustrophobia

What the fuck else
can happen.

Mike Foldes is the founder and managing editor of Ragazine, an online literary magazine. He is also the author of "Sleeping Dogs, A true story of the Lindbergh baby kidnapping," and "Sandy: Chronicles of a Superstorm," with artist Christie Devereaux."
Download at www.Smashwords.Com and www.Amazon.Com

A Memoir of Delirium & Dementia 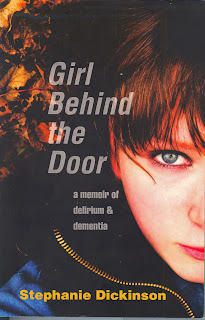 The subtitle of this book is “a memoir of delirium & dementia.” I would say it certainly is that. Several of the chapters have also appeared as short stories in various journals.

I found the book very hard to read; not that the writing was difficult, in fact the writing is quite fine. The main problem was that I had, in the not too distant past experienced the death of my mother and felt too close to the scenes that were created. These were incidents that I had put to the back of my mind. And while I had never been shot by a friend, accidentally or otherwise, and lost the use of my arm; I have had a number of motorcycle accidents that have left some parts of my body functioning less than perfectly. This is even more so now that I am no longer a young man.

Yes, Stephanie was wild in her youth, or so she tells us in this memoir; but weren’t we all. Reading through the book I kept finding parallels to people and situations that I encountered in my younger days. The question was did I want to be reminded of these moments of my past. We were Poles in Pennsylvania not Czechs in Iowa; however, the only difference was the geography.  My friend Price, who was my competitor for best writer in high school, who became a high school teacher, and who drank himself to death competing in a drinking contest at a local bar, could easily have been an inhabitant of Dickinson’s sadly changing Iowa landscape.

Where Dickinson excels is in the understanding she shows of her mother and the descriptions of their relationship. She reveals herself in conflict with the woman, loving her for who she is, but wanting to escape from all she stands for. I found myself relating strongly to these parts, as I had made similar choices in my past; choices I tell myself worked out well, but wonder still what might have been.  As I write this I am flipping through Girl Behind the Door. Tomorrow I shall begin reading it all again. I am looking forward to Stephanie Dickinson’s next book.