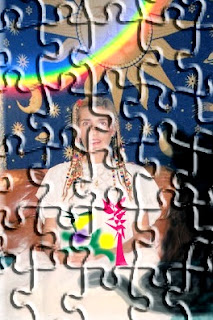 Silhouette...where are you? Here kitty, kitty, kitty! Damn that druggie former friend and his dealing girlfriend. She let Silhouette outside. I was just there for one night before I'd catch a flight back home to the east coast where I was born.

The condo complex was ticky-tacky endlessly all the same and the repetition and the people staring at me as I drove around and around with my passenger door wide open hoping Silhouette would hear me and leap in the car, making me joyful and myself again. Not a car he'd recognize since it wasn't mine. I just borrowed it...declared I was taking it to find my cat and my ex-friend had no say in the matter at all. Ricky Ticky Tavi, like a mongoose I was gonna find him if it was the last thing I ever did in my spiraling life, I swore to God.

Damn...I got a D.U.I. in that dinky little Mormon town in Idaho where I went to ski for a winter; like what a great idea while my boyfriend was in jail so at least I could lay low and traverse the law and chaos I tried to escape since my life was gone like Silhouette was.

Wow....what a stupid idea, like most of mine were on the merry go round I was living. I took a geographic , for fun or something...returning to the saner parts of my childhood excluding all the drama and combustible parents and dysfunction. Now I was not only estranged from my boyfriend...I lost my key to responsibility and love and care who had always been my touchstone. "Silhouette...where are you? Here kitty, kitty, kitty." Everyone thought I was nuts and out of control and an accident waiting to happen. Waiting to happen? It already had happened time and time and time again. Maybe I should believe it and turn it around myself. Right...not so easy a thing to do, I secretly had discovered but swiftly dismissed as an aberration of my mind.
Holy smokes...the state troopers found me hanging over the Snake River in my car but they saved me! That damn blizzard disoriented me on my way home from the cowboy saloon where my car wouldn't start when the bar was closing. I was a cocktail waitress...my job to earn money and ski the incredible, awe inspiring mountains. What a blast I was going to have. I was an avid skier who learned as a young child when the roses were red and smelled like an overpowering perfume confection.

However, like Thomas Wolfe said in 'You can't go home again. " I have to see a thousand times before I see it Once." Now...I said the state troopers saved me. Then why did they take me to the county jail instead of taking me home? I was being victimized, treated unfairly, what a joke they convoluted my untenable situation.
"Silhouette ! Where are you? "Now people were waking up in the ticky-tacky rows and they are curious who the woman was wending her way with her car door open and screaming something incoherent. My mind was screeching, my heart was pounding I couldn't go home again without him.

Those Mormon neighbors of mine banged on my door every Sunday morning inviting me to walk with them on the Mormon Path and learn what they knew about life and salvation. It was sort of sweet but me, spend seven hours every Sunday doing whatever they did all day long was definitely not for me. I was always nursing a hangover and needed to recoup by sleeping like Goliath. They even gave me a Mormon Bible the entire fifteen person family had signed. Do you think I should have read it? Or the Bible? Or the Koran? Or Anything about a Higher Power ? I sometimes thought I wasn't worth saving...fleetingly before I reminded myself how fun and unfettered my exciting life was. "Don't tie me down." Yeah.

"Silhouette...." My voice was getting hoarser, the hours were passing like a tortoise and the damn car was running out of gas. A gray apparition whizzed by me mentally and clunked down flat on my lap! Holy smokes...it was Silhouette climbing up my chest !! "Silhouette...you're with me again...I won't ever let you get lost again. It wasn't your fault...maybe mine for hanging around with sketchy people. But never again Silhouette. We're going home again." I hoped that Thomas Wolfe could enlighten me.

Story and illustration by Sasha Thurmond who is an artist and writer living on a farm in South Carolina with her horse and other animals and who also finds time to write, paint, and take photographs. She is a graduate of the Master of Fine Arts program at Cornell University, where she studied with Steve Poleskie.