Did Lindberg Have a Secret Copilot?
______________________________
A Review
____________________________
In his latest novel, “Vigilia’s Tempest,” author Stephen Poleskie confronts history as it has been written by posing the question: What if Charles Lindbergh had a secret copilot with him to keep him from falling asleep on his famous flight from New York to Paris, and what if the man who flew with him was still alive? If he could be found, what would he tell us? And why has he kept hidden all these years? Poleskie, an aviator himself, constructs this complicated and perplexing story with a virtuoso display of practical expertise, compassion, and poetic vibrancy.
When John Vigilia, a well-known American stunt pilot, and university professor, lands at an abandoned air base in Canada to avoid a thunderstorm he meets a strange old man named Caliban who tells him the story of his twin brother, Ariel, who as a young boy flew with Charles Lindbergh as his secret copilot on his famous solo trans-Atlantic flight. The copilot was supposedly picked up in Nova Scotia and dropped off on a beach in Ireland, while Lindberg went on to Paris, and to fame, alone. Seeking a diversion after his wife’s sudden death, John Vigilia travels to Europe to explore the truth behind the Lindbergh story he had heard. Unexpectedly, John finds himself in the middle of a decades-old international intrigue. Has John discovered the conspiracy of the century, or is it just the old man’s hoax? And why is John Vigilia now being followed everywhere, and has had an attempt made on his life? One might be tempted to call “Vigilia’s Tempest” a “literary thriller.”
Poleskie takes Vigilia through a series of adventures in Ireland, Rome, Como, and Munich, before finally allowing him to catch up with the alleged copilot, Ariel Angelucci, in Locarno, Switzerland. Ariel reveals that he was indeed in the airplane with Lindbergh when he flew across the Atlantic. Not sure if he believes Ariel’s story, Vigilia takes the man up for a flight in a biplane to see if he really knows how to fly. The old man wants to do some “stunts,” but has a heart attack at the top of a loop, jamming the controls and causing John to crash.
John Vigilia wakes up confined in a private clinic on an island in the Lago Maggiore. He is told that, despite what he believes, there was no one in the airplane with him when he crashed. When his injuries heal, but he is not released, John realizes that he is being held prisoner at the clinic because of what he now knows.
Does Vigilia ever get off the island? I am not going to spoil it by telling you. Suffice it to say that he has a few more adventures, and even a love affair, yet to go before the end of the book. The conclusion is both tragic and uplifting, as are all Poleskie’s endings, confirming the author’s strong sense of the continuity of life.
Poleskie, who writes with a rich and full vocabulary, in the manner of such European authors as Bruno Schulz and Witold Gombrowicz, and with the dark praise of obscurity and failure found in Fernando Pessoa, also manages a tip of the hat to William Shakespeare. “Vigilia’s Tempest” is filled with numerous storms, an island, and character names and chapter quotes from Shakespeare’s play “The Tempest.” At 500 pages this is the longest of Poleskie’s novels to date, but the plot’s many characters and interesting twists will keep the reader engrossed until the very end, and then even wanting more.
.
Sidney Grayling
.
***
Trafford Publishing, Victoria, BC, 2010, ISBN: 978-1-4269-2946
To view the video trailer click link below:
http://www.youtube.com/watch?v=JY5eCVRnDw0
***
Available from www.Amazon.com
Posted by Sid at 5:45 PM No comments:

________________________________________
Why aerobatics? Leonardo Da Vinci once wrote: “When once you have tasted flight, you will forever walk the earth with your eyes turned skyward, for there you have been, and there you will always long to return.” The decision to take a biplane ride two years ago was a spontaneous one, but the decision to pursue flying was very deliberate. Upon my first taste of flight in a small aircraft, I knew there was a potential subject that needed to be explored. Every flight from that first day forward has confirmed this belief, and I have committed myself in every respect to this unusual form of research.
The research process began with flight training: hours in the plane, learning all stick and rudder aspects of flying; hours studying written materials, written, oral and flight tests. The inspirational biplane flight, also an aerobatic ride, led me to experience upset-training, spin-training, and aerobatic training first hand.
Now, in addition to being a licensed pilot, I have learned to fly loops, rolls and spins (among other variations); I can also fly inverted. I can achieve the disorienting perspectives that originally inspired me, and doing so is more mind-boggling than I ever imagined.
And suddenly, it dawns on me that I am an artist/aerobat. I am not one during the week and the other on the weekend; I am both, all of the time. The artist’s eyes filter everything I see when I fly, recording images and memories of the senses, both visual and physiological. The aerobat in me, who knows flying from the inside, brings the information to the studio. The artist translates the language of flight into form. And I realize I would never have made this work without becoming a pilot; and now that I am a pilot I will never see the world—or my work-- in the same way.
I consider myself an ambitious person, and have always tried to embrace my passions fully and without fear. In just two years, while maintaining a full-time teaching career, my studio practice and a family of three children (as a single mother until recently), I got my pilot’s license. I began aerobatic training while still a student-- even though it was initially suggested I wait until I got my license. In August 2009 I was awarded a highly competitive national scholarship for aerobatics, called the Douglas Yost Memorial Scholarship. A month later, I went to my first aerobatic competition and, placing 4th, won the Best 1st-Time Sportsman award. I was the first woman—ever-- on the Boston Chapter 35 Aerobatic Team, and one of two women in a field of 50 competitors at the contest.
The collision of art and aerobatics is something I believe in. I am devoting my life and my art to it, embracing the risks, both in my studio and in the air.


Statement
You haven't seen a tree until you've seen its shadow from the sky. ~Amelia Earhart
I have had a longstanding fascination with pattern and the decorative arts from other cultures, and this interest in pattern has been the core of my work for years. Ornament appeals to me, both as form and as subject. I have looked to many sources for pattern, in particular carpets, embroidery, textiles and lace. I originally chose lace as an image due to its association with femininity and decoration, its explicit ornamental quality, and its open and delicate character. Lace embraces the beautiful, the extravagant, and the intricate. In my more recent work, lace has reinvented its identity; it is a sign for clouds, symbolizing their whiteness and their veiled layers. The patterned field becomes a metaphor for both the invisible layers of atmosphere in our sky, and the dense layers of foliage on land.
Previously, my work addressed pattern and decoration as its subject. My world was literally turned upside-down the day I took my first aerobatic flight in the summer of 2007. From that moment on, I knew I needed to learn how to fly an airplane, After a lot of flying and studying, I got my pilot’s license and began doing aerobatic training.
Post-flying, pattern and decoration have become just one of my visual languages. The thematic shift in my work to aerobatics shifted the form, and I found that the symmetry is not always important. One of the biggest shifts this year came with the entrance of the horizon line in my paintings. Using the horizon has allowed me to orient the viewer, giving a cockpit view or an aerial view. Runways are distorted, and upside down. Small, dotted aerobatic airplanes execute snap rolls, hammerheads, spins, and loops through the paintings. There are also references to the aerobatic box, an imaginary 3,000 square foot cube of air that is suspended over the ground and in which all aerobatic maneuvers must be executed in competition aerobatics.
Flying aerobatics is a sensory thrill, but it is physically taxing. In defiance of gravity, the G-forces affect a pilot physically. In the stomach, the range is from butterflies to nausea, to being utterly sick. Other gravity-induced sensations are cranial pressure, severe G-headache, seeing stars and graying out during flight (a precursor to blacking out). Visually, aerobatics provides stunning new perspectives that literally upset everything that one might take for granted: the horizon can turn around a wingtip or an airplane’s nose with mesmerizing grace. I strive to express these physiological experiences through the paintings.
I use aeronautical maps, called sectionals in the work and their function is similar to patterning, except that they also impart specific information. Most of the maps I use are of the places I have flown frequently. The function of the maps is also to orient the viewer and to give information about the land below.
Patterns, layers, and color are still the foundations upon which these paintings are constructed. By combining and recontextualizing various images: lace, maps, airplanes and aerobatic diagrams, my intent is to generate new meaning. At its heart, this work is about embracing the thrill and majesty of flight. It celebrates extreme flying with visual splendor: it is the reflection of the experience.
Lise Lemeland, 2009
Lise Lemeland's work will be on exhibit at the 222E41Gallery in New York City unti April 9
***
http://www.liselemeland.com/
***
"Aileron Roll" Acrylic, 2009 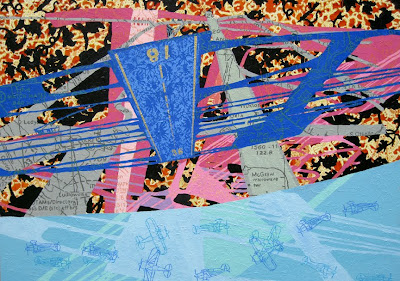