hat morning was different. My eyes felt locked in a cage of dreams. And the bed was floating in ill smelling semen. I tried to remember last night. In Paris, I was with San Tiago the street artist who was travelling with me from motel to motel. My life came back to me in bits and pieces of flesh that I feed the stray dogs on the beaches of Orissa. I remembered the lady who stared hard through her party mask and said how inappropriate it was for a late Hippie to turn up for a book launch. The laugh I laughed walked back to my senses, like a dancer in the Middle East, teasing me to massage her backside. Or was it the front? I cannot recall. The backs and fronts and ins and outs collide and converge and push up like a ball of vomit that’s uneasily trapped in me for centuries. Very soon a laugh escapes as the vision of a Punjabi wedding hall, the one I sneaked into one hungry night in Ludhiana. The mountains of food were hallucinogenic..and soon they were nothing more than tits and asses and buttholes that people lined up to eat.

San Tiago, like many other men looking for exotic flowers that bloom in dangerous swathes of forests, asked me for marriage. The joint almost burnt into my fingers when I told him off. I told him I was getting fat and I was squinted, I was too vain and too beautiful, too free and too much of everything. That he was a street painter, and that all his work was trampled over by cars and feet and pissed on by dogs. He told me about Beauty and Art. About the inky black roads that lead everywhere and his Madonnas emerging aka thrusting out like pelvic bones from the cosmopolitan consciousness. “It is not about how many people stop and look, it is how much they are disturbed by a nonsensical burst of colour out of the corner of their eyes. It is like the fly that you cannot kill.”

My throat was parched for the want of Darjeeling tea. I rolled over and Darjeeling appeared as I had first seen it, emerging like a comely bride from the windows of a chugging train. The explosion of green at my window had probably inebriated the little me. I could hear Ma coaxing me to eat the bread and hard boiled egg. I simply watched, a sandwich uncouthly stuffed in my mouth. Darjeeling emerged in intolerably green tea estates past my window. I even waved to some Kanchis but no one waved back. Later in Geography, I learnt they were intent on plucking two-leaves-and-a-bud.
.
As a child and often afterwards, I have been confused about vacations. I had a strong urge to jump and run in the green fields that the train was carelessly cutting through, towards the horrible definitude of a vacation. I watched the lapis lazuli sky over the fields and wondered where colours came from, I almost stretched out my hand to catch the wings of the flying stork. Soon I would be itching to take a vacation from vacations.

Teetering on the thin railings of a balcony somewhere in Mumbai, my drunk mind sang a poem to me. Rosa was clasping my hand, equally drunk. We had decided minutes back that we would commit a grand suicide, for we were pained by the terrorist bombings in Mumbai, that the little boys who were playing with red balloons on the beach, now had their brains spattered on the sands. Rosa didn’t know much, understood less. It was a blessing I told her. She had told me not to die. I took breaks from puking out stale chicken kebab and demanded an answer. “Don’t you see green fields that rush by a chugging train? Don’t you see white sea gulls floating over the blue foaming ocean? Don’t you see wild creepers shooting out of old walls like little rebellions? Don’t you see babies being born out of nowhere, growing up, marrying and producing more babies?”

I sneer when I think about Rosa. Rosa was the widow of a man twice her age whom she married when she was sixteen.

--“Because he was the only one who did not demand a dowry.”

-Why did you conceive so early?

-Because people started saying I was late.

I remember people looking at me queerly when I hung around with Rosa. They thought it weird that girl from a respectable family to be spending so much time with a brown uneducated widow from a remote Maharashtrian village. I gave a damn of course and suffered secretly. I suffered when there wasn’t a single soul to pass me a glass of water when my body was burning at one hundred and four degrees.

Rosa often told me of her village.

-My husband never beat me.

-There are homes where the man just walks off one morning and returns with a wife. A man lives with as many as five wives in our village and beats them all.

- Our neighborhood is too noisy, with children and women squabbling. The men mostly snore after a bout of country liquor.

I adore the ocean. I can sit at its fringes and think about Rosa’s village, about how children are produced like steel billets. How women are forced to behave like conveyor belts of babies spilling over on soiled sheets in soiled hospitals. How my grandmother had dropped one of her fifteen siblings accidentally. She was little and excited when she heard the hawker calling out wares. In her rush, she had placed the new born too near the edge of the bed. It had rolled over, fallen and died after breaking a hip bone. Nobody cared, there were fourteen others, and soon the mother would bring more.

San Tiago tells me I am too vain for my ideals. I am as common as the strip dancers at the streetside dance bars and as exotic as Caribbean folk music
.
I get up naked and strut around the dingy room. It seems that for years I have been travelling from dream to dream, where one opens gates to the next. I cannot find my way back. I push my head outside the window and immediately the eve-teasers start cheering from below. I turn and look down at my cleavage and spare them a smile. Poor, Poor desires!

It is the lull before great storm. The sun is about to set on a breathless landscape. I smell the tense air, anticipating, hoping against hope. The horizon turns crimson in minutes, a beautiful calm drapes over the high-rises beyond.

In moments, the storm will arrive.

When I was in school in that village of mine, in the poverty that sucked away dreams like an octopus wrapping tentacles around his victim, I sat near the window, and suddenly the mathematical tables etched with white powdery chalk on the black slate grown old and weary with overuse, the sensation of the straw mat tickling me under the skirt Ma had patched up in several torn places, my hair, grown a straggly length just touching the shoulders, beating lightly with the wind, the heat and the salt of teenage skins all repeating after the teacher like tightly railed tracks. I sensed a remote storm building up somewhere, a storm that resembled hundred years of pent up desires of a squadron of soldiers sent to fight some war in Siberia. Back when I wasn’t sure what desire meant. Back when I didn’t know what any of this meant. This, me, here, sensing everything letting go, melting, dissolving, into a force beyond. Another time I had lost consciousness, staring into the village pond, feeding the giant fishes and watching the ripples. The village doctor pronounced that the spirits had possessed me. I was a cursed child. I felt a giggle escape me when I saw Ma crying about how am doomed to be an old unmarried maid. Who is going to take the hands of a poor dark mad girl?
San Tiago and Rosa do not believe me when I say I was born in a village. That I made my way to the world.

-Your skin is too bright. You don’t smell of the earth.

One of my early lovers complained that my body smelt of endings and death. I had smiled and pulled him close and switched off the glaring light that seemed to peel off layers of my epidermis and distribute a disturbing fragrance everywhere. I could not of course tell him the truth. I am free because I keep running away. Each escape piling up a like small death in me, like deceased embryos bursting at the pores of my skin.

When I tell San Tiago of my lovers, he merely turns his face and plays the flute. He says one day he shall make a portrait of me at Times Square and then I’ll have no way of escaping him! “The magic is in spontaneity. Streets and Traffic do not give you preparation..time is as scant as in the preparation of a Revolution. A revolution can begin with a baby’s cry in some remote, inaccessible corner of this planet..it gathers mass like a skeleton gathering flesh..it is the virility of a single voice that strings together an entire generation..”

It is one of those days when the bed is unmade and the room stinks of cheap wine. It is humid enough to trace beads of silvery sweat that balance themselves like ballerinas on my eyelashes. The sun is down and the darkness is screeching with crickets. Outside, the ice cream vendor puts me in a daze.. 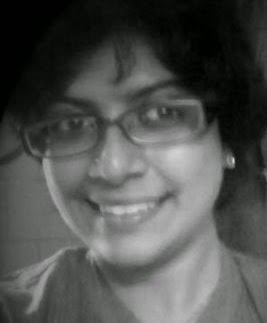 Sreemanti Sengupta enjoys a world of divided minds. She is an advertising copywriter from Kolkata, India, a poet, a struggling author, an e-mag editor, an elocutionist, previously published in various online journals such as Mad Swirl, Paragraph Planet, Certain Circuits, Bare Hands Poetry, Ppigpen and more including print anthologies in both English and her vernacular Bangla. She founded and runs The Odd Magazine celebrating alternate creativity herewww.theoddmagazine.wix.com/thisisodd and blogs atwww.weareideating.wordpress.com

from
Red in Tooth and Claw
a novel by Paul West
published by Onager Editions, 2015


Fifteen minutes later, in a black sheepskin hat and a holed plaid shirt encrusted with a complete range of droppings from egg and mustard to whitewash and manure, Gnonka the pig-farmer untied the cords and began to finger the five suits, one with satin lapels, one of a tweed perfumed with Baltic heather, a third with two vests of which one was velvet with maroon pearl buttons, while the other two were ordinary and a bit worn at the cuffs and elbows: these two culled from the house, not his own at all, and certainly not his taste, which did not run to tree-bark brown.