a poem by
Mike Foldes

Animals that moved
And those whose bodies

Advancements notwithstanding,
Technocrats and alley cats

Much changed
Remaining animal at the core.

The upright man
On hands and knees

Goes begging
at the open door

The door at water’s edge
That moves no more.

Mike Foldes is the founder and managing editor of Ragazine, an online literary magazine. He is also the author of "Sleeping Dogs, A true story of the Lindbergh baby kidnapping," and "Sandy: Chronicles of a Superstorm," with artist Christine Devereaux."
Download at www.Smashwords.Com and www.Amazon.Com

A Story by Sasha Thurmond 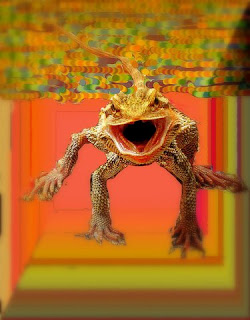 My castle, my Queen, my children, my subjects, our home, love, and power,  our Kingdom,
we fought to preserve it all, we fought for freedom from our enemies, and others who threatened it, including adversaries within our own castle walls.
What fuels life and one's heart to keep alive the desire to live well, not just for survival?
Writers, artists,  musicians create their craft through their word, their images, their songs, their deeds as heartfelt expressions. The amount of things people seek in a lifetime is daunting.
My juvenile dragon, named Zippy, was missing. I tore up my lair while desperately trying to find him.
Our moat and our castle walls weren't guaranteed protection. My dragon was gaining  empowerment to protect our kingdom . However, he was still very small and was also the family pet that the children played with out of sheer fun and glory.
I promised them their beloved dragon Zippy would be home soon. He was on a mission. I knew it would break their hearts if I was wrong, but they, and I, needed hope. A loyal dragon was worth it's weight in gold.
Our soldiers were preparing for a battle with a neighboring country who wanted to conquer us, and take our land and  entire Kingdom.
My mind was busy planning for the approaching war, and I checked out all our entrances and exits, how secure our castle walls were, and how many soldiers were staying home to fight  the invaders  from inside the castle walls.
Looking high at the top of curtains draping from one spire, I thought I saw something that varied from the curtain's pattern. I summoned a ladder and though I was King, I climbed up it myself to investigate this oddity. As I drew closer to it, I held my breath....blinked my eyes, and prayed that what I saw was true.....that I had finally found Zippy !
Sure enough it was, but he was ice cold and in a dormant state that dragons lapse into when they become too cold or are ill. Zippy allowed me to pick him up without protesting as he tried to awaken. I descended the ladder cautiously so as not to drop Zippy He had been lost for three weeks. He had lost a considerable amount of weight, and was very dehydrated.

I immediately placed him on the hearth of a blazing fireplace, and summoned food and water for him. I headed to my children's bedrooms to awaken them, and tell them that Zippy had indeed returned to us, and told them to go see him with their own eyes. They clamored out of bed and rushed off to the great hall where Zippy was thawing out.
While they fussed over him, I reflected how fortunate I was that Zippy was home safely, and my promise to the children had come true
When Zippy heard we were preparing for battle, he wanted to go with the troops to fight our enemies, but I told him that until he was older, his job was to protect all the children and keep them out of harm's way. Zippy was exuberant and gladly went back to being the family pet. In time, he knew that he would be the protector of the entire Kingdom.

Sasha Thurmond is a graduate of the Cornell University MFA program where she majored in printmaking. She lives on a farm in South Carolina with her horse and other animals, and sometimes finds time to make art or write poems or stories.