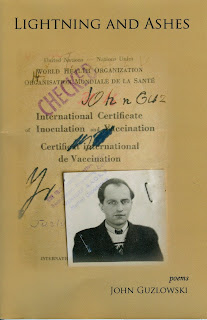 A Collection of Poems

WHAT MORE CAN ONE SAY about this collection of poems than has not already been said by the Polish poet and Nobel Laureate Czeslaw Milosz. “In [Guzlowski’s] poems the land of his parents and the work camps are always present, although at the same time they are only part of his poetic repertoire. [T]here are a lot of completely different poems . . . free of the burden of the past. This slim volume even astonished me with its doubleness. The first part summons precisely the camp images from the life of the author’s parents, who were treated by the Nazis like beasts of burden. Their awkward language, because they were both half-literate, was for the Nazi’s a language of mules. The second part reveals an enormous ability for grasping reality at some distance.”

In Lightning and Ashes Guzlowski takes on his father’s vision, through his own eyes, to recreate a past that he has not known, and then uses his father’s eyes to recreate a youth that he has lived. In this way he becomes both the actor and the audience in a drama of his own creation. The poems cause us to speculate how the author’s family might have live had WWII not happened, and then relates, unforgettably, what actually did happen, and its effects on the family long after the war was over.

Although the death camps in WWII may seem as an unlikely topic for poetry, and perhaps a matter that has been too much explored, Guzlowski’s sensitive, yet strong use of the language brings a new dimension to the subject. These poems remind us we should not forget that human suffering is universal. What went on in these camps in the 1940s still goes on today; brought on by the same reasons of race, religion and economic differences.

And my father will shovel

in terror and think of the words

he will not say: Sirs, we are all

brothers, and if this war ever ends,

what you’ve done to me today.

I must admit that I rarely read a book of poetry completely, more often skipping to individual poems that catch my fancy, but Lightning and Ashes was an exception. I do not hesitate to give this collection my highest recommendation.