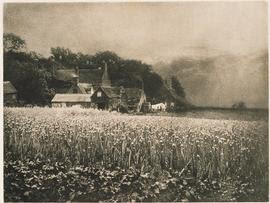 "Life is an onion. You can't peel it without tears."

From "Tears and Onions"

Located between Syracuse and Utica, Canastota, New York once produced most of the onions in the Northeast, but its legendary mucklands, primarily cultivated by Sicilian immigrants and their children, are not a natural phenomenon.  Like almost everything else in Onion Town, the rich soil is a product of the Erie Canal, which transformed Canastota, incorporated in 1835, from a backwards hamlet to a prosperous town with four railroad lines and factories that manufactured cut glass, coaster and dump wagons, and steerable sleds.  In fact, when the village was first settled in 1810, the mucklands didn’t even exist.  They were submerged under an enormous swamp stretching three miles north of the village, a Stygian tangle of trees, roots, and mud that flooded so often the settlers were obliged to build their first houses on stilts.  A year later, a plank path was built through the swamp to connect Canastota to Oneida Lake, followed by an Indian trail, but the Oneidas avoided the area unless the season was very dry.

Although some early Canastotans had the foresight to see agricultural potential in this slough, canal engineers made that dream a reality.  Gentleman venturers with a classical bent, they tackled the problem with the methodicalness of a Frontinius.  In 1850, Douglas Ditch was cut between the swamp and Oneida Lake and twice extended in 1867 and 1875 to form a line between Sullivan and Lenox townships.  Twelve years later, State Highway Commissioner Charles Foster decided that the whole area should be drained and converted into productive farm land, a project more ambitious than the Emperor Claudius’s draining of the FucineLake.  After winning the skeptical town’s approval, he began constructing what was to become Onion Town Road.

The incentive to cultivate the land, however, was spurred by the depression of 1893.  After the local economy collapsed, Canastotans sought other ways to make money, so they sluiced, cleared, and tilled the bog north of the village, between Main Street and SouthBay, and constructed houses and barns.  The work was backbreaking and frustrating, so it is no surprise they had put if off for fifty years.

Since horses were helpless in the swampy land, ditches had to be dug almost entirely by hand.  Thick patches of trees, small bushes, and tangled roots still remained, and stumps had to dynamited.  Even then, many patches had poor drainage, and during the wet season, some crops were always under water.  The first muck farmers were Americans, who would not stay the course.  The work seemed dirty and a degrading, a comedown from the village’s recent glory days.  But for the Italian immigrants who succeeded them, working the muck was like clearing the Promised Land.

First came the Genovese.  Domenico and Assumpta Cervasco moved to the village in 1886.  They operated a peanut stand on the banks of Erie off the Peterboro Street bridge and convinced friends and relatives to join them.  The Sicilians arrived a decade later.  As manual laborers for the LehighValley, WestShore, and New York Central Railroads, they dead-ended in Canastota and had nowhere else to go.  They lived in abandoned railroad cars on the edge of town and foraged for dandelion greens.  Factory work was scarce because of the depression.  Fortunately, the newcomers’ arrival coincided with the village’s push to cultivate the mucklands.

While the Sicilians recognized this opportunity, they were reluctant to embrace it.  Most had abandoned agriculture, having become thoroughly disillusioned with the soil.  “Who tends the earth tends his grave,” they said.  Back in Sicily, they had not been contadini, peasants who owned and worked their own fields and vineyards, or fittivali, tenant farmers, or even mezzadri, sharecroppers, but cafone, unskilled farm hands and migrant pickers.  The equivalent of white trash, they had lost all love for the land.  It was the ancient curse of Sicily.

Twenty-five centuries of colonialism had transformed Ceres’ island from the garden of the Mediterranean, where even the keenest blood hounds would lose a scent because of the abundant flowers and herbs, into a lunar rock.  The Carthaginians, to punish the Sicilians for their loyalty to the Greeks, burned wheat fields and sowed salt in the earth.  The Romans, who conquered the Carthaginians, overworked the soil to feed their gluttony.  The Arabs, their successors, introduced irrigation and citrus farming but also brought goats, which munched their way through the greenery.  The Normans, who expelled the Arabs, deforested the island to create their fleets and composed chivalric epics while the topsoil washed away.  The Spanish, who kept the best fields for themselves, were worthless, irresponsible landlords, but the Bourbons, at least, would not tax livestock, produce, and draft animals.  After the revolution, however, the new Italian government taxed all three, wrecking Sicily’s agriculture and sparking the Fasci riots of the 1880's.  In the wake of this chaos, Sicilian peasants were faced with a stark choice: emigration or starvation.  Little wonder, then, that most of Canastota’s newest arrivals had sworn off farming.

But the vast mucklands seduced them.  They were a return to the Golden Age.  Never before had the Sicilians seen such miraculous soil.  Black, rich, moist.  Anything could grow in it: cabbage, chicory, celery; above all, onions.  The onions tantalized them.  Back in the Old Country, the man who owned an onion patch was a king.  What were the glories of Segesta and Agrigento, those Grecian temples and peristyles, compared to a fertile onion patch?  This attitude still prevails in Sicily, where as recently as 1975 an outraged farmer near Palazzalo Acreìde defaced a priceless Attic frieze on his property because tourists and archeologists would trample his onions to see it.

The Americani had their priorities straight.  No ruins, just onions.   And such onions!  As big as your fist.  Hell, bigger than the head of your first born!  The Canastotans were rightly proud of them and gave them the sonorous names of race horses: Bronze Fiesta, Ebenezer, Golden Beauty, Southport White Globe.  A carillon of bulbs in a paradise of onions!  And if the Americani, with their haphazard, heavy-handed methods, could work such miracles, what might the Sicilians do, with their thousand tried-and-true, subtle techniques of coaxing crops from the dust?  They gladly became sharecroppers in the American onion fields. . .