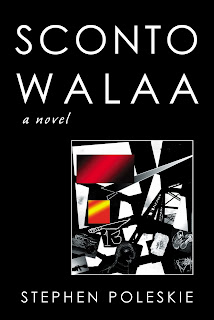 WHILE THOUSANDS OF MEMBERS of our military are currently suffering from undiagnosed post traumatic stress disorder, PTSD, no serious work of fiction has yet dealt with the consequences of this severe problem. This is the subject Stephen Poleskie’s latest novel, “Sconto Walaa.”

A National Guard corporal named Sconto Walaa, recently returned from deployment in the Middle East and suffering from undiagnosed PTSD, has decided to murder Walter Whitman, a used car dealer, and former NFL player, who he suspects raped his wife thirteen years ago, and who may be the father of his daughter. A homeless man was arrested for the rape back then, but was murdered in jail before his trail could be completed. The key evidence was a pair of red, white, and blue Nike sneakers the man was found wearing, but also the same shoes worn by Whitman, and Mrs.Walaa’s boyfriend back then, John Wojyhovich, who had disappeared at the time, but has since returned to town as a Catholic priest.

Walaa tortures Whitman, using techniques he learned while serving as a translator at a “black hole” prison site. Unable to extract a confession from the former Wilbender College football hero, Walaa kills him.

An overly zealous detective team from the State Police, thinking they have found the murder, based on mistaken clues and some cobbled together evidence arrest Walaa’s wife, who has been having an affair with the returned Father John. Walaa, who suspects his wife’s infidelity, has also discovered that his daughter may have been raped by the used car dealer when she reveals that she had gone up to his apartment after school on several occasions. In a drunken rage, screaming that she is a whore just like her mother, who is sitting in jail waiting for him to bail her out, Walaa rapes his daughter.

At the same time a Hollywood film company is in town making an action movie called, “Battle of the Bridges,” They plan to blow up the abandoned Wilbender Bridge, an old iron girder bridge that looks like a WW II era span in Germany. Walaa’s National Guard unit is standing in for both the US and German armies in the movie. Corporal Walaa, as company clerk, is responsible for seeing that all persons are off the bridge before it is blown up.

The final chapter has Walaa sitting on the bridge in a plywood mock German tank, pondering the mess he has made of his life. Should he go to the police and confess to the murder, freeing his wife, who will then be able to go off with her lover, Father John? Should he wait until just before the bridge is blown and jump into the water and swim away, hopefully to start a new life somewhere else, or should he just sit where he is and go up with the bridge, ending it all?

“Sconto Walaa” is a probing analysis of both the bizarre and the banal choices facing our returning war heroes today. Poleskie is a skillful writer, with a careful understanding of his characters, and a brilliant sense of the language, making this book, despite the depressing subject matter, a very enjoyable read. I do not hesitate to recommend it highly.

Condé Nast's new boilerplate contract for freelancers, under which it acquires a free 12-month right to option dramatic and multimedia rights to articles appearing in its magazines and then, if it exercises that option, shares less than half the usual amount with the author, has gotten us thinking: what makes a rights grab? After all, there are lots of terms in a typical freelance journalism contract or book publishing contract that wouldn't be there if the two parties had roughly equal bargaining power. (We'll name two from trade book contracts: ebook royalties at 25% of net proceeds and any noncompete clause that isn't reciprocal.)

So, when does a contractual term cross the line and become a rights grab? Breaking with industry practice is clearly one thing to consider. A second is whether the publisher is seeking to control rights that aren't the main point of the contract. A third -- a biggie -- is compensation: is the publisher taking rights at bargain-basement rates? Another way to look at that is whether a journalist or book author with greater bargaining power would find the deal acceptable.

Condé Nast's new boilerplate hits this trifecta with ease. Taking dramatization rights breaks with industry practice. The publisher is compensating the freelancer for his or her journalism, not for speculative movie and tv deals. And freelancers with adequate clout are reportedly avoiding the onerous new clauses entirely.