A Excerpt from Foozler Runs 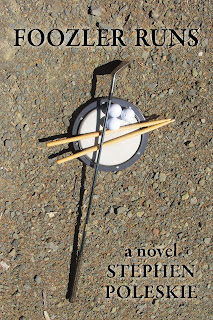 from Fozzler Runs, a novel, published by Onager Editions

Johnny’s mind gropes back to a dingy recording studio in New York City. Marijuana smoke fills the room, empty Scotch bottles line the counter tops. He has been there for the past twelve hours, with only cold pizza to eat. The band was arguing. They didn’t want a song—the one that was being played on the jukebox this very moment—on the album that they were making.
It was not a song they had written. Nevertheless, the producer wanted it included; he owed a favor to the songwriter, or was screwing him, or something like that. Their manager had compromised, claiming the song was not really that bad, actually rather kind of catchy. They had tried six or seven versions of the song, about 36 takes, each one more pitiful than the last. But the song “Snake’s Belly” arguably one of the worst songs ever written, somehow had caught on, and became The Artful Foozler’s only runaway nationwide hit. Johnny has not heard the tune played on a jukebox in a good many years.

“That’s The Art Foozler!” Johnny blurts out.
“Yeah . . . I love ‘em,” Marie says. She is doing a little dance, a kind of twist, between the counter, getting into the music, shaking her body, feeling the beat, lost in the rhythm, no longer a middle-aged woman, but a teenager again.
“Woo! Wooh! Go for it Marie!” someone shouts. Other customers are clapping their hands.
Johnny can see Marie’s nipples standing out on her shaking breasts. He feels a firmness growing between his legs, a heat he has not felt since his wife’s death. Marie keeps bouncing, smiling; she is dancing just for him.
“. . .snake’s bbeelllllyyyyyyyyy. . . . Yeah!!!”
The music stops; the frisson passes.
“Whew!” Marie says, wiping her hair from in front of her face.
The truck drivers applaud politely, and then go back to smoking and staring at the dregs in their coffee cups.
“Oh god. . . . excuse me,” Marie says to Johnny. A ripple of sweat runs down her neck and disappears into the crevasse of her breasts. “I just got carried away there for a moment. It’s The Artful Foozler . . . they are my favorite-ever group. Actually, they’re still pretty popular around here, the jukebox plays “oldies.”  But you don’t hear anything about them anymore. I read years ago that the lead singer killed himself, and then the group broke up. Have you ever heard of them?”
“Heard of them,” Johnny replies. Although he fancies himself a humble man, Foozler is vainglorious to the point of wanting to be envied. “Hand me two of those spoons there. . . .”
Tapping the spoons on the counter top, Johnny beats out the exact drum solo that they just heard on the record.
Marie tilts her head and listens intently. “Hey! You are good. Then you have heard The Artful Foozler before. . . .”
“Heard them! I was one of them!”
“What do you mean?” Marie says, placing her arm on John.
“I’m Johnny Foozler . . . I started the group, and was the drummer!” he exclaims.
“Ya don’t say?!”
Marie places both her arms on Johnny. Close up, almost intimate, she stares into his face, trying to recall an image from a record jacket, a group of carefree young boys, with long hair and sun glasses. They were trying to look arrogant and self-confident, when in reality they were actually diffident and insecure. Marie superimposes the various images over Johnny’s no longer young face, his head bristling with a short and unkempt shock of gray hair, tufts bristling too long on his eyebrows, and from the openings of his nostrils.
“Jeez. I know which one you are,” Marie exclaims, stepping back from John. “Like, you’re the one with the big nose!”
“The big nose? . . .” Johnny repeats, sounding offended. Yes, his nose did appear a little too large back then, however, over the years his face has grown up to match his nose, and there are women who think him even more handsome now than when he was younger.
“Oh! I didn’t mean it that way,” Marie retreats. “I mean your nose wasn’t ugly big, it just was . . . well . . . bigger than any one of the other guys in the group; if you know what I mean. Oh god . . . what am I saying, eh . . . anyway, I’m really pleased to meet you. What did you say your name was, again?”
“Johnny . . . Johnny Foozler, the one with the big nose. I was the drummer.”

STEPHEN POLESKIE is a writer and artist, he has published six novels and numerous short stories. His artworks are in many major museums including the Museum of Modern Art and the Metropolitan Museum in New York, and the Victoria and Albert Museum and the Tate Galley in London. He is currently a professor emeritus at Cornell University.

While limits on book discounting in France and Germany receive much more attention, Publishing Perspectives took a recent look, in separate pieces, at how pricing and discounting is shaping the book market in two countries with vastly different reading and book buying cultures–Argentina and Korea.
In Argentina, state-mandated price controls help bricks-and-mortar bookstores thrive, while in Korea, which has no such restrictions, the success of a discount book chain is sparking calls for fixed pricing. In both countries there’s debate over whether the need to preserve literary diversity should trump the free market.
Argentina implemented book price controls in 2002 following a devastating economic crisis. The fixed price law, known as the “Defense of the Bookstore Activity” act, requires books to be sold at the same price at all stores until 18 months after a book is first published. The situation today, reports Publishing Perspectives:
In Argentina book business remains robust, having sold more than 50 million books in 2012, worth an estimated revenue of $535.7 million. According to the Cultural Information System of Argentina (SINCA), the country’s 2,256 bookstores are responsible for 80% of total book sales, with sales equally divided between hundreds of independent bookshops and a few large chains.
Price is not the only key to the success of Argentine bookstores, however. Publishing Perspectives describes a country of passionate booksellers, intelligently curated selections and bookstores serving as cultural centers.
In Korea, where book consumption is at a 10-year low, used book chain Aladin is under fire for discounting policies some are calling “reckless and myopic,” says Publishing Perspectives (which based its piece on a story in The Korea Times). While officials are debating a law forbidding more than a 10% discount on new books, some say the law would be useless because Aladin routinely sells new books as “used.”
Dong-Asia Publishing, recently said that it would no longer sell its books through Aladin’s network. The company’s president, Han Sung-bon, says that despite the risk, it’s the right decision.
“Aladin’s used-book stores are masquerading as second-hand book shops, but they are essentially discount shops aimed at moving new books. These shops have been encouraging twisted, unconventional discount activities that are hurting the health of the entire market.”
Aladin denies the accusation and says newer titles make up only tiny portion of its sales.