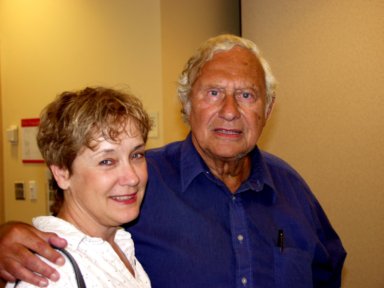 Paul West and Jeanne Mackin at a reading at the Tompkins County Library,Ithaca, NY, in the fall of 2005. Article and photo by Stephen Poleskie

LAST WEEK I SPOKE to Paul West on the telephone. We had not been in touch for some weeks, then I received a letter from him in the mail. My wife, Jeanne Mackin, and I used to meet with Paul, and Diane Ackerman, every Sunday for brunch at the Sangam Indian Restaurant in Collegetown. However, since his stroke, the second he has had, and his subsequent development of Broca's Aphasia, we have only met once since his return from Florida, where he now spends the winters. I must say that I miss our regular meetings, which were always quite witty, and sometimes rowdy.

Broca's Aphasia affects ones ability to speak and understand language. Paul does have a brief time, during the middle of the day, when he is not afflicted by this malady. Otherwise, usually after about three o'clock he does what he calls "zoning out." I was reluctant to call, as I know Paul tries to work during his "clear time," but he doesn't use a computer, preferring an the old fashioned typewriter, so doesn't answer e-mail.

Paul sounded happy to hear from me. He has been busy since his stroke and has written three books: Tea With Osiris, a book of poems, The Shadow Factory, a prose meditation on the effects of his illness, and a 700 page, as yet untitled, novel. This two year output would be staggering for any author, but Paul has always been productive, having in the past written over forty books, and numerous short stories, articles, essays, and book reviews. The poetry book has recently been published by Lumen Books, and excerpts from it appear below. The prose work will be available from the same publisher in 2007.

from TEA WITH OSIRIS

Back in the hospital a child
of twelve is screaming, felled
by loss: Where is she?
They hold her close, then down.
Osiris added her to his own.
And the foam from her squandered lip
will take its place among famed
vapors from cuckoo to Lear, aimed
at school children out on a trip,
from Emily Bronte's poisoned menses
to Eva Braun's best pensées.
All grist for the Osiris mill,
which says, whatever you will,
you shall please me till I kill.

One summer's day in winter
when the snow was raining fast,
a barefooted boy with clogs on
stood sitting on the grass.
He went to the movies that night
and bought two front seats at the back,
ate a big plain cake with currents in,
and when he'd eaten it he gave it back.

A review of Paul's book, written by Bridget Meeds, appears in the August 23, 2006 issue of the Ithaca Times. Here is a brief excerpt from this review:

TEA WITH OSIRIS IS a book of poetry, only the third West has ever written. It is a dizzying 53-page sequence of sonnets about Osiris, the Egyptian god of the dead, as he swans about a modern American hospital with a kidney stone "somewhat smaller than / that blocking Christ entombed," waiting for the awful nugget to pass. By turns ribald and funny, morbid and clever, West is as intelligent and language-drunk as ever. Osiris is, as he writes, "As fully languaged as Pan / with constant updates from the constabulary / of vocabulary..."
But the voice here is much more compressed than in his novels, which tend to sprawl. In this book, West is compelled to say more with fewer words.
Sonnets such as (those printed above) don't shy away from truth.

Thank you for logging on. Please check back again. We accept submissions at OnagerEditions@aol.com.

a short story by

The telephone rings, interrupting our dinner, the tense, jarring sound phones make when you are waiting for a message; perhaps word that someone close has died.

There is a long pause, John considering whether to go on, his earlier tone indicating he was expecting to hear good news.

All she has to do is clean them. I'm bringing them right over." John says, and then hangs up.

I have no chance to protest, nor to ask my mother if she even

We hurry to finish our dessert, two portions of homemade apple pie. There is none left to serve to John, who loves my mother's apple pie, if he should arrive while we are eating our pieces, and the first bites we have already taken from these slices have made them unofferable.

Arriving at the back stairs almost immediately, John shouts: "Hello!

I brought the fish."

I walk out on the back porch to greet him, but my eyes do not meet his, rather they are drawn to the bucket of squirming, green and silver and brown, mustached and scaled creatures, swimming in more of their own kind than water, what little there is of it turned pink by fluids that must have once been inside the fish themselves.

The widow woman from next door, also telephoned from his nephew's house, and who is considering the possibility of the never married John, arrives at my mother's back steps with her knife. The three begin in earnest: decapitating, splitting, gutting, then laying the pieces out on the concrete stairs. Severed, the fish heads wink their eyes, and open and close their mouths, a gesture that must have been what got them here in the first place. Then, they shut up forever.

"Fresh!" John says, holding up the streamlined creature wiggling in his hand, its intuitive grasping at life to be taken as proof of his statement. "I caught them just this morning at Slocum Bottom. They were running ... just jumping on my line. I was using leaches . . . they like leaches."

"Get a knife from the kitchen, Son," my mother says, turning to me, "John will show you how to clean fish."

Several tails on the pile of discarded pieces still flap, obeying motor commands sent by brains that now lie in a separate heap.

I go inside, as if to get a knife, but do not come back out.

Eight plastic bags dripping fluids, six machines pulsating with multicolored digital readouts that monitor his every puff and beat, and finally cutting away more than half of his insides, keeps my father alive for another three weeks; then the huffing and burbling, and beeping and wheezing stops.

John, no relation, but a close friend of my father, gets to ride in the limousine, all the real relations being either too far away or already dead.

"Jeez, this is a great car!" says John on the way to the church, never having ridden in a Cadillac before.

"Jeez, this is a great car!" says John on the way to the cemetery.

He has never wanted an automobile before, content to walk wherever he needs to go in our small town, but a Cadillac is different.

"I'm getting old," John says, "I shouldn't have to walk up and down these hills every day." He does not realize that it is probably because of these daily walks that he has reached his fine old age.

"I could use a Cadillac to go fishing," John tells us, "and not have to wait for my nephew to take me . . . he works and can only go on Saturdays. Do you know how much a Cadillac costs . . . I mean a good used one? I couldn’t afford a new one. I would think that people who owned Cadillacs keep them in pretty good condition, wouldn’t you?”

For the remainder of the funeral, John talks only of his future Cadillac; thereby avoiding the grief my mother and I are experiencing.

Stephen Poleskie is an artist and writer. His work is in the collections of the Metropolitan Museum and the Museum of Modern Art, among others. His novel The Balloonist is forthcoming from Frederic C. Beil, Publisher in January of 2007.

Thank you for logging on. Please check back again.

The Color of Time