Not Just Any Moon 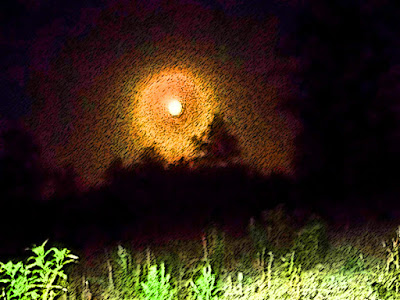 Not Just Any Moon
the summer Solstice moon possessed me
nature's rare, majestic orb
in a never ending cycle
spinning my soul ripe for change
why was I out in the woods
powerless to the full moon's glory ?
heart pounding faster than a sane person's would
The moon's beauty unfurled
I merged with it's aura
nature's unharnessed power
man bows down to its radiance
my life...my soul, my love
what happened ?
what force or predator will eventually find me?
It's time to go.... don't look back
the solstice moon my elixir
my savior
the moon beckons, challenges me . " Come dance...I dare you."
Perhaps I'll perish here while the summer solstice moon dazzles,
but for now, I joyfully dance.
Sasha Thurmond 2016

Sasha Thurmond is a graduate of the Cornell University MFA program where she majored in printmaking. She lives on a farm in South Carolina with her horse and other animals, and sometimes finds time to make art or write poems or stories.*   *   *
photo by Sasha Thurmond

What Fiction Asks Us to Remember

Think of history as narrative. Think of historical fiction as expanded narrative, history with all the trimmings, with cause and effect, speculation, personalization. Think of expanded narrative as the story teller reaching out to you, saying, "pay attention. This is important.” Or as novelist Jeanette Winterson repeats over and over in The Passion, "Trust me. I’m telling you a story," and then as she relates a Napoleonic narrative of a Venetian woman who walks on water, you do believe her even as you know she is lying through her teeth, because that is what novelists do. But this important: you don’t believe that Venetian women necessarily walk on water (though it would be a convenient skill, considering global warming and the state of Venetian canals) but you do believe Winterson’s message that love changes us, that war changes us and that war is not conducive to happy endings, because that is what her story is really about.

We best believe what we remember, and narrative is about memory: giving memories in the form of stories, receiving memories and adding them to our personal stores. But historical fiction, as memory creation, asks us to do the impossible, to remember experiences we can’t possibly have had, to "remember" the smell of the rosebush growing outside Hester Prynne‘s jail in Hawthorne‘s The Scarlet Letter, to remember crouching in darkness outside the mead hall, the perpetual outsider, as John Gardner’s Grendel does; to remember the sensation of the earthquake that begins the action of Richard Hughes’ A High Wind in Jamaica; to remember the wild vines strangling the decaying plantation in Rhys’ Wide Sargasso Sea. All of those things were before our times; yet having read them, we remember them.

There is a relationship between memory and freedom, asserts Dr. Chris Nunn, author of De La Mettrie’s Ghost: the Story of Decisions. Nunn examines free will and the decision making process and ultimately concludes that “stories…are the mediators of free choice.” He argues that people whose ‘memories are more malleable should, other things being equal, be less prone to conditions like milleniarianism “{belief that the world will end on a given date simply because of the date} and other forms of private or mass delusion. People with flexible memories are less gullible…“thanks to its intimate relationship with the memory process, consciousness can to some extent determine its own future.”
Call me an idealist, but perhaps fiction can prevent us from making even bigger and more dangerous idiots of ourselves than the species already has. Perhaps historical fiction keeps our memories malleable by constantly recreating and adding to those memories; perhaps there is a connection between fiction, memory and freedom. Gardner’s Grendel can be read as an early eco-novel, among other things: “They {man} hacked down trees in widening rings around their central halls and blistered the land with peasant huts and pigpen fences till the forest looked like an old dog dying of mange.”

In Jean Rhys’ postcolonial devastation in Wide Sargasso Sea, the destructive misery of failed empire comes home to roost in a suicidal conflagration: “I got up, took the keys and unlocked the door. I was outside holding my candle. Now at last I know why I was brought here and what I have to do. There must have been a draught for the flame flickered and I thought it was out. But I shielded it with my hand and it burned up again to light me along the dark passage.”

Richard Hughes’ incredibly convincing narrative of the connections between entitlement and violence in A High Wind in Jamaica reveals how a lack of self-responsibility so easily leads to murder and how that violence estranges us: “Mr. Thornton made no attempt to answer her questions: he even shrank back, physically from touching his child Emily.Was it Conceivable she as such an idiot as really not to know what it was all about? Could she possibly not know what she had done? He stole a look at her innocent little face, even the tear-stains now gone. What was he to think?”

Murdered pirates, decaying plantations, mead halls, Napoleon’s roasted chickens…artificial memories bestowed by historical fiction, but who’s to say that an artificial memory is less meaningful than mundane ones? De La Mettrie argues that memories become encoded in neurons and have physical properties, so why can’t the memories acquired in a reading of fiction matter as much as the memory of today’s first cup of coffee and who poured it for you? Read, and remember. Is it possible to also understand something from what is given us by the memories in fiction? “The past is the present, isn’t it? It’s the future,too. We all try to lie out of that but life won’t let us,” Eugene O’Neill tells us in Long Day’s Journey into Night. Perhaps what fiction most asks us to remember is that memory keeps us human, and if we remember enough and remember well, we can add an "e" to human.

JEANNE MACKIN is the author of seven novels and has published short fiction and creative nonfiction in journals and periodicals including American Letters and Commentary and SNReview. She was the recipient of a creative writing fellowship from the American Antiquarian Society and is an award-winning journalist. She has taught English at Ithaca College and creative writing in the MFA Program at  .

Jeanne Mackin's latest book A Lady of Good Family, the story of the early architect Beatrix Farrand and her relationship with her niece, the novelist Edith Wharton is available on Amazon at this link: http://www.amazon.com/Lady-Good-Family-Novelebook/dp/B00OQRL57U/ref=tmm_kin_swatch_0?_encoding=UTF8&sr=1-1&qid=1433293389