From the Finger Lakes, A Prose Anthology 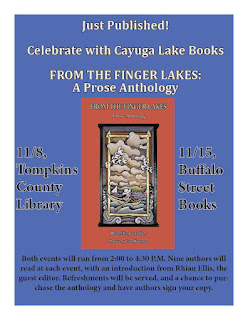 From the Finger Lakes: A Prose Anthology contains the work of 44 highly-talented local authors of fiction, memoir, and reportage writing both about the Ithaca area and parts of the world less "centrally isolated."  Cayuga Lake Books launched the book at two readings.  The first took place on Sunday, November 8, to a large crowd in the Borg Warner Room of the Tompkins Country Public Library between 2:00 and 5:00.  The second was held on Sunday, November 15 at Buffalo Street Books.  The following authors participated: